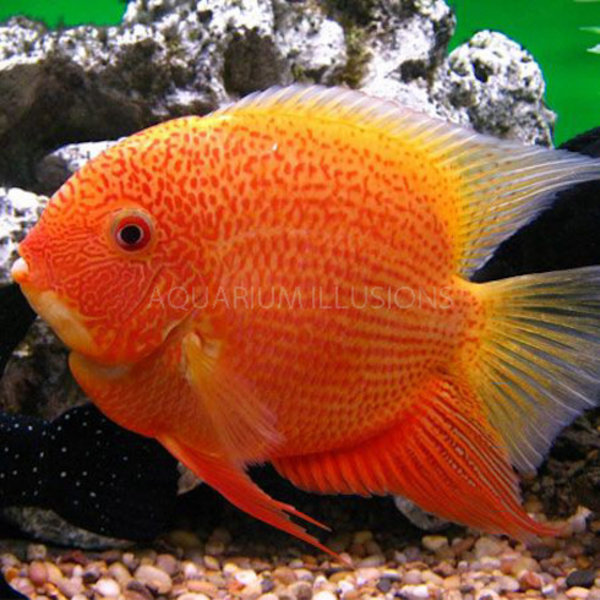 The Red Spotted Gold Severum, also known as the Banded Cichlid, is a color variation of Heros severus Severum. Severum have an iridescent sheen to their scales and off-white to gold background color. The Gold Severum is a trusting fish, and will often accept food directly from their owner's hand.

The Red Spotted Gold Severum requires a 30 gallon or larger tank that is at least 40 inches long and 20 inches tall. The larger the tank the better. They prefer a lightly-planted tank with a soft bottom and a few rooted plants. Adding a few large rocks would be appropriate as long as there is still plenty of open room for swimming. The Red Spotted Gold Severum can be aggressive when spawning, and for this reason should only be housed with other semi-aggressive fish.

Differentiating between the male and female is very difficult. Positive identification can only be made after close examination of the genital papillae. The Red Spotted Gold Severum does not pair as readily as other South American Cichlids, and may take a bit longer. Providing the male with a choice of females will help. An open breeder, the female can lay as many as 1,000 eggs on rocks. The water should be mildly acidic, soft with a pH of 6.0-6.5 and a hardness of dH 5. The temperature should range from 77-82°F. The Gold Severum carefully tends to its fry.

The Red Spotted Gold Severum is a carnivore and will eat most prepared and frozen foods, including freeze-dried bloodworms, tubifex, and ocean plankton, as well as flake food and Cichlid pellets.