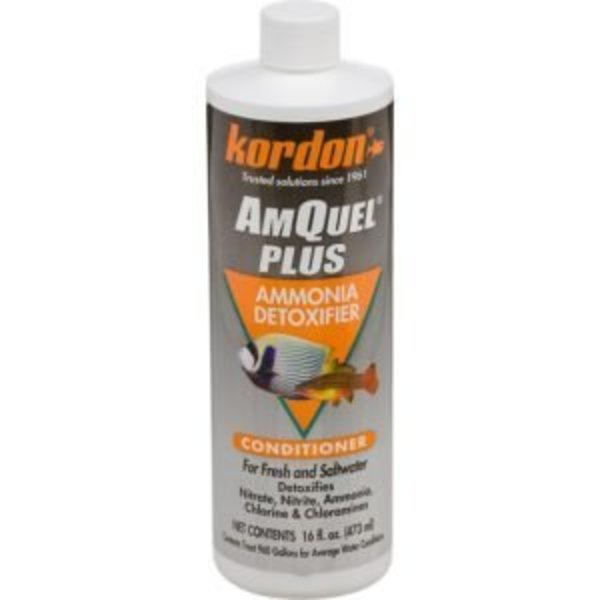 AMQUEL® PLUS™ AS THE PREMIER AMQUEL® PRODUCT

To avoid confusion it should be recognized that there are two products with the AmQuel® name - the original AmQuel which Kordon has been providing since 1985, and the recently invented product AmQuel Plus which is based on a much improved new chemical formula. AmQuel Plus is the latest development in state-of-the-art water conditioning technology and is far beyond what the original AmQuel product does. AmQuel Plus does all that AmQuel does and a significant number of additional tasks as well. .

AmQuel Plus is a remarkable new discovery that is making fresh and saltwater aquarium and pond keeping much safer and simpler. It is doing this by safely detoxifying natural nitrogen compounds in the water, including nitrites and nitrates. Thereby, the use of AmQuel Plus greatly reduces the need for continual water changes, and provides far better water conditions for fishes, aquatic invertebrates, and other life in fresh and salt water.

AmQuel Plus (also referred to as AmQuel +) has the ability to make the "nitrogen cycle"totally nontoxic in aquarium and pond keeping, without interfering with the cycle's process in any way, and without interfering with the beneficial bacteria that are involved with the cycle. AmQuel Plus detoxifies all chlorine and chloramines added to the water by public water utilities and toxic nitrogen compounds that can appear in aquarium and pond water over time, thereby making water changes less necessary, and providing a safer environment for fishes and aquatic life.

AmQuel Plus reduces the problems with "new tank and pond syndrome," which in great part are caused by the nitrifying bacteria in the water. AmQuel Plus makes biological filtration much safer by detoxifying its natural processes. AmQuel Plus does all this without having to be removed, once it is put into the water. It remains totally nontoxic to aquatic life.

AmQuel Plus should be used for setting up aquariums or ponds, for water changes, overcrowded aquariums and ponds, the control of toxic nitrogen compounds commonly found in water while the nitrogen cycle is established...as well as afterwards as nitrogen compounds accumulate in the aquarium and pond water.

Fresh water is a precious commodity and becoming in ever shorter supply. By using AmQuel Plus fewer water changes are needed in aquarium and pond keeping, thereby conserving a valuable resource. For marine aquarists AmQuel Plus greatly helps in decreasing the number of water changes needed, thereby saving on having to prepare sea salt mixes or natural sea water.

AmQuel Plus is harmless to plants, fishes, invertebrates (including corals and sea anemones), and other aquatic life forms. This product is safe for use in aquariums and ponds and will not interfere with biological filtration or its bacteria. When AmQuel Plus detoxifies ammonia, nitrites, nitrates, and other organic compounds, it breaks the links of molecules apart. The nitrifying bacteria do not know the difference and eat the parts, just as they would the whole original compounds.

Where AmQuel Plus is particularly useful is in its detoxification of all nitrates in the water. There are not sufficient bacteria in the aquarium (fresh or salt water) and pond water to do this. In the past the only way to get rid of nitrates from aquariums and ponds was by water changes. Now this can be done in a few minutes with AmQuel Plus. This leaves the main reason for making water changes (now needed less frequently) to replacing trace elements in the water.

AmQuel Plus is recommended to be used with Kordon's NovAqua Plus because they mainly do different functions that collectively are needed in aquarium and pond keeping. NovAqua Plus is most important for treating tap water that comes from public water utilities that has accumulated toxic metals from water pipes, and in providing health aids to the fishes and aquatic invertebrates. See NovAqua Plus for further information. AmQuel Plus and NovAqua Plus are provided as separate products because they cannot be combined and stored together, without loss of efficacy.

AmQuel Plus should not be added to water containing active, therapeutic dosages of chemical dyes such as methylene blue, acriflavine, malachite green, potassium permanganate, iodine, and acriflavine, since AmQuel Plus will interfere with their proper performance. Combining AmQuel Plus with these dyes will not result in toxic chemical by-products. AmQuel Plus can be useful in those instances when it is desirable to terminate a treatment with a chemical dye

Compatibility of AmQuel Plus with water test kits: since a significant number of water test kits for aquarium and pond keeping are inaccurate, this is an important issue for those trying to make water tests.

AmQuel Plus is compatible to use with those water quality test kits on the market that are fully effective (see note below), except for the ammonia test kits that use Nessler reagents that read in shades of amber or yellow, and the oxygen test kits that use Winkler reagents. Residual AmQuel Plus and its reaction products are incompatible with the Nessler and Winkler type reagents, resulting in false, high ammonia and low oxygen concentration readings.

As a general rule, when using tap water in which chlorine and chloramines are present, but not nitrites, nitrates or other organics -- then it is safe to use the less expensive AmQuel. If there is the possibility of nitrites, nitrates and other toxic organics being involved in the water, then AmQuel Plus is recommended.

For aquariums and ponds add AmQuel Plus to the water at the recommended dosages as described above. Since AmQuel Plus rapidly spreads through the water, no special agitation is needed. Its action on chlorines will be in seconds. Most of the reactions on other nitrogen compounds in the water will be over the first five minutes, and the slight remainder will be detoxified over the next 24 hours.

To control the toxic organic nitrogenous compounds of ammonia, nitrite, and nitrate and other toxic organics that build up in aquariums and ponds from the excretion of body wastes by fishes, invertebrates, bacteria and other aquatic organisms, start with a standard dose (see definition above).

The use of one standard dose of AmQuel Plus for the amount of water involved is recommended per 24 hour period during the first days for total or major water changes, and at least once a week for the entire water volume in regular use, whether water changes are made or not. The number of treatments to be made over time depends upon how crowded the water conditions are with fish and/or other aquatic life. The AmQuel Plus will penetrate throughout the water, including the water in the gravel, sand, or other bottom material. If excess AmQuel Plus is put in the water, it will remain active until chorines, chloramines, or nitrogen compounds appear in the water that it can detoxify.

Water out of the tap from public water supplies contains up to 4 ppm = parts per million (= 4 mg/L) of chlorine, as per the U.S. EPA Environmental Protection Agency, and usually less than 1 ppm ammonia/ammonium. When chloramines are present, AmQuel Plus breaks the chloramines bond apart, and one standard dose of AmQuel Plus detoxifies all the chlorine (it is capable of removing up to 33 ppm chlorine, and up to 2.0 ppm or more ammonia/ammonium). Therefore, only one dose is usually needed, and at most two doses, for removing all chloramines and their chlorine and ammonia components from all public water supplies.

The removal of these compounds when dosing with AmQuel Plus will happen mostly within five minutes, or slightly longer for ammonia in water with a higher pH above 7.5. The slight remainder, if any, of nitrogen compounds will be removed within 24 hours. It is important to understand that the amounts of organic compounds removed may vary with differing water conditions. The amounts indicated above are the minimums that AmQuel Plus will detoxify, and what is removed may be up to several times to many times higher.

AmQuel Plus rapidly detoxifies toxic organics, which is very important in overcrowded aquariums and ponds where waste products from the fishes, etc., quickly collect.

Another purpose of AmQuel Plus is to detoxify nitrogen compounds that accumulate in the aquarium and pond water over time, including noxious pheromones released by fish and aquatic invertebrates to signal and repel each other. This is specially important for reducing the frequency of needed water changes. Many larger freshwater and saltwater aquarium fishes release toxic pheromones to establish territoriality and repel other fishes. This is particularly true in fresh water for larger cichlids, and for larger marine plectognath fishes (triggers, filefish, puffers, boxfish) in salt water.

Among the benefits of AmQuel Plus are that it is easy to use and equally effective in fresh and salt water. AmQuel Plus does not affect the beneficial bacteria of the biological nitrogen cycle. AmQuel Plus is compatible with all water conditioners and all Kordon non-chemical medications and other non-chemical medications on which it has been tested, including organic herbal medications, and with all aquatic life - including live rock and reef tank inhabitants. Other benefits are that AmQuel Plus does not affect pH (acidity and alkalinity), and does not discolor the water. AmQuel Plus has a long indefinite shelf life at full effectiveness that is expected to be many years.