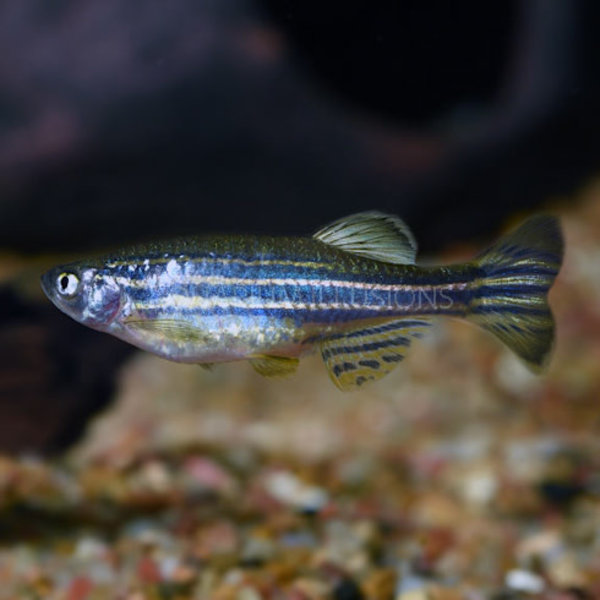 The Zebra Danio boasts an instantly recognizable striped, zebra pattern. A perennial favorite of freshwater enthusiasts, Danio rerio is either silver or gold with five uniform blue/purple stripes that stretch horizontally from the gill to the end of the tail. The Zebra Danio is a highly active swimmer, especially when kept in small schools.

Native to the Ganges region in Eastern India, wild Zebra Danios are found in a variety of habitats, ranging from fast-moving streams to slow-moving, nearly stagnant ponds. In the home aquarium, this member of the Cyprinidae family prefers a well-planted aquarium with large open swimming areas. For best care, keep this peaceful fish in small schools with equally non-aggressive fish.

Since they are omnivores, feed the Zebra Danio a varied diet of flake and frozen foods.

Male Zebra Danios are generally more torpedo shaped, while females tend to have a larger belly. Generally, male Zebra Danios spawn with and remain loyal to one female. A breeding pair should be placed in a breeding aquarium with fine-leaved plants for them to spawn over. Roughly 300-400 eggs are produced and hatch within two days. The fry should be fed small pieces of live foods, such as brine shrimp.