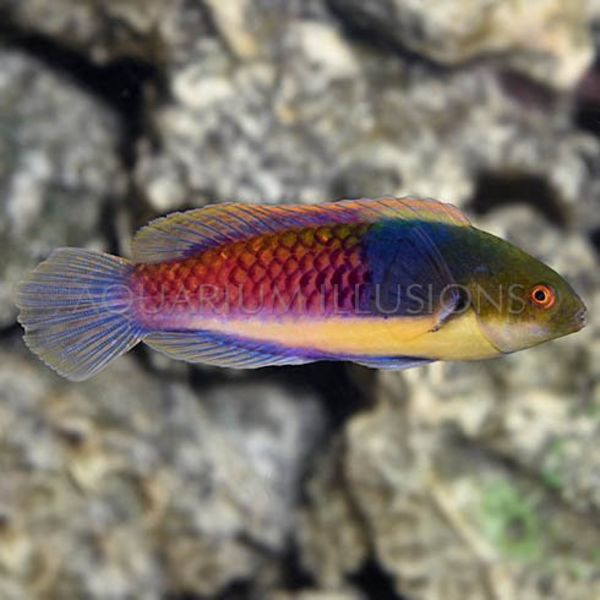 The Bluesided Fairy Wrasse is also known as the Blue Scaled Fairy Wrasse, Yellow Flanked Fairy Wrasse, Purplehead Parrot Wrasse, or the Bluehead Fairy Wrasse. This species varies in coloration considerably ranging from a red and blue coloration, to a deep maroon and deep blue coloration. More often than not this species will have a pale underside. The Bluesided Fairy wrasse and the Yellow Flanked Wrasse Cirrhilabrus lyukyuensis have been commonly mistaken for each other for some time in the science of ichthyology. Hiroyuki Tanaka, a leading authority on Cirrhilabrus spp, tends to believe that these two fish are synonymous with one another, and differ only in coloration based on their exact locale. Cirrhilabrus lyukyuensis normally has a distinctive yellow to orange patch just behind the pectoral fins. Please expect variations in coloration with these fish, as the intensity of coloration and patterns may also vary with the location of their natural habitat, their age, and their mood.

The Bluesided Fairy Wrasse is an ideal fish for the reef aquarium adding both bright coloration and activity to these aquariums. Wrasse of the genus Cirrhilabrus mix well together if they are introduced simultaneously to the tank, and are one of the best groups of fish for a reef tank setting.