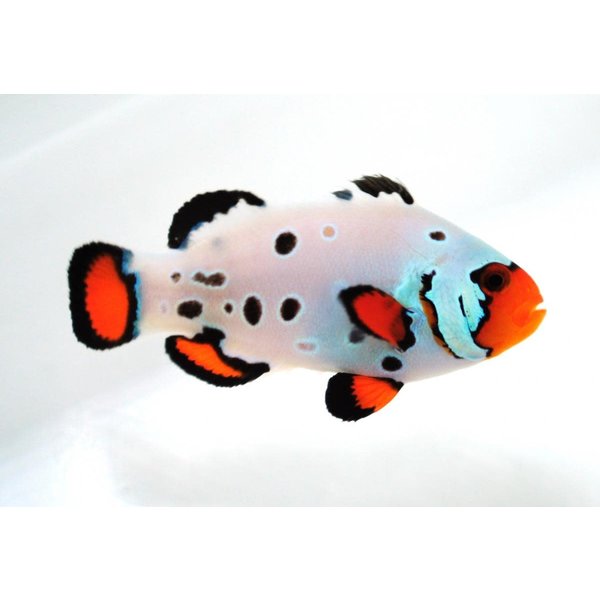 The Captive-Bred Frostbite Clownfish from ORA® sports beautiful and distinct features. The Frostbite was created by blending the best traits of the popular Captive-Bred Snowflake Clownfish and the Captive-Bred Gladiator Clownfish. The Frostbite is decorated with black trim around brightly colored orange faces and tails. As they mature, they develop an electric blue hue around the borders of their white flanks. These stunning fish also feature white spots, or “buckshot” throughout their bodies. This feature is widely variable from fish to fish, so no two are alike.

This member of the Pomacentridae family is an excellent addition to almost any saltwater aquarium system. Captive-bred fish have a unique advantage over wild-harvested species, as they are generally very hardy and more accustomed to conditions found in the home aquarium. Therefore, captive-bred fishes make a great choice for novices and seasoned aquarists alike.

The ORA® Captive-Bred Frostbite Clownfish is easy to breed in the home aquarium. Clownfish are egg layers and will deposit the eggs on a flat surface and defend the eggs from other tank mates. The eggs will normally hatch in 8-11 days depending on the water temperature. The fry must be reared in a separate aquarium on a diet of rotifers followed by baby brine shrimp.

This Clownfish is an aggressive eater. It will accept most meaty foods and frozen herbivore preparations.